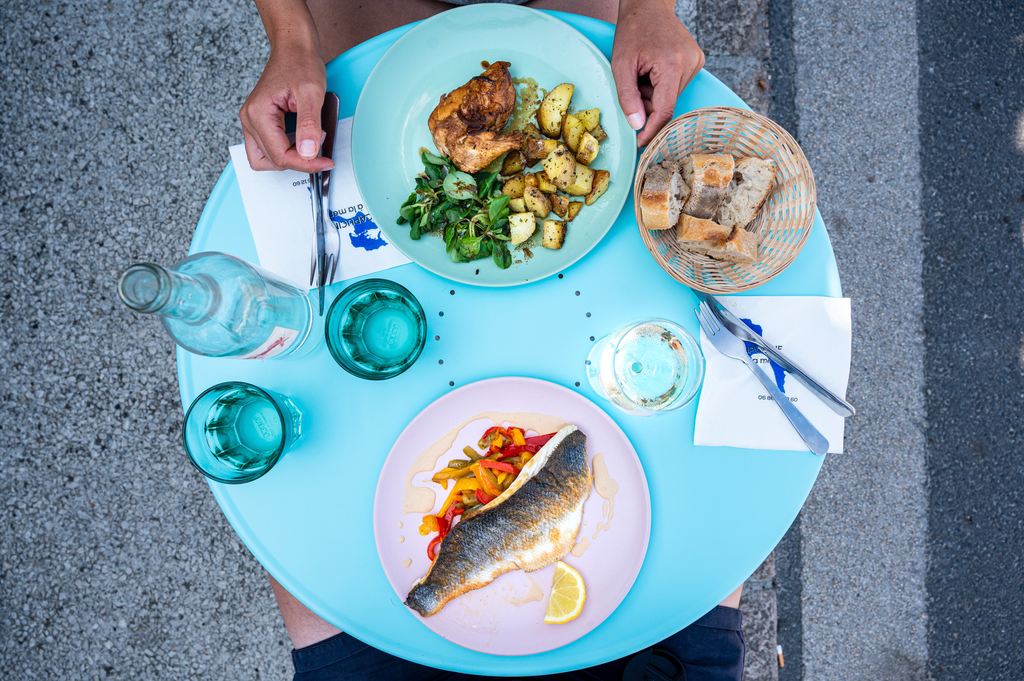 The gilthead sea bream – a rockfish that has inspired songs

In antiquity the gilthead sea bream was a more common object of gourmet affections and it provided poets with inspiration. It was during this time that the title of queen of fish menus and culinary treats was bestowed upon this fish. Today’s foodies display equal zeal when preparing it and coming up with new and more intriguing ways how to prepare it. The name gilthead sea bream (orada) is most common. This name stems from its distinct gold spot, but depending on which part of the Adriatic you are, you’ll encounter a number of local names such as komarča, podlanica, lovrata, zlatulja, dinigla and quite a few other names.

The gilthead sea bream belongs to the Sparidae family of fish, commonly called sea breams and porgies. Istria, Novigrad sea, the coastal area surrounding Šibenik and Peljašac make up the best fishing areas in Croatia. Fish markets also offer gilthead sea breams which have been raised on fish farms. It is widely considered to be the most important white fish type thanks to the quality of its meat, sophisticated taste and nutritional contents.

In accordance with traditional Mediterranean cuisine, the most common way to prepare the gilthead sea bream is by using quality local ingredients which further accentuate its flavour. But its meat is so good that you can unleash your culinary virtuoso and let you imagination go wild.

After you’re done removing the scales and gut, you can grill it, bake it in foil, steam it, roast in on salt or you can smoke it. It’s a good idea that you thoroughly pat dry the meat with paper towels or make a few cuts into the meat with a knife before you grill the sea bream or while frying its fillet. That way the crust will stay crispy, while the meat will acquire the tenderness it needs to take in all the seasonings used for marinating.

You can’t do without olive oil, lemon and white wine if you’re oven-baking your sea bream, be it in foil or kartoč (al cartoccio in Italian, is a method of cooking in which the food is put into a folded pouch or parcel and then baked). If you like, you can also add some root vegetables, fennel, lemon and lime slice, rosemary, parsley and garlic. We suggest you include orange, chilli peppers or ginger in your ingredient list if you’re into trying out new flavours. Different kinds of vegetables such as cherry tomatoes, sweet potatoes, beans, different kinds of courgette, new potatoes, pepper and many others go great with gilthead sea bream.

Depending on how you prepare your sea bream, you can also serve it in a salad. You can add rucola, pine nuts or almonds and balsamic vinegar dressing or a white sour cream and dill dressing. A glass of dry white wine with a fruity bouquet will round off your light lunch perfectly.

If you’re keen on showing off your culinary skills to your guests or family, surprise them by making sea bream in a salt crust. Marinade the sea bream in lemon after you clean it. You can also stuff it with herbs and spices you like. It’s vital that the skin be intact when preparing sea bream in a salt crust so the meat wouldn’t get damaged by the salt. The salt bed is made from egg whites and coarse sea salt. Cover the fish with the salt mixture and put in pre-heated oven at 200°C. When it’s done, you can serve it to your guests. Be careful and slowly break the salt crust with a knife. You can serve the fish as fillets or chunks.

You can try classic sea bream dishes at Bepo Tavern in Tribunj, where you’ll be served with traditional Dalmatian delicacies made from freshly caught fish at your discretion. The family-run Zlatna ribica Restaurant is located in the vicinity of Šibenik. In addition to their fabulous seasonal dishes, there’s always a daily selection of fresh fish for you to choose from. In the eponymous Sorgo Palace in Dubrovnik you’ll find Sorgo Restaurant, where you can try the delicious oysters from Mali Ston and relish fresh sea bream dishes.