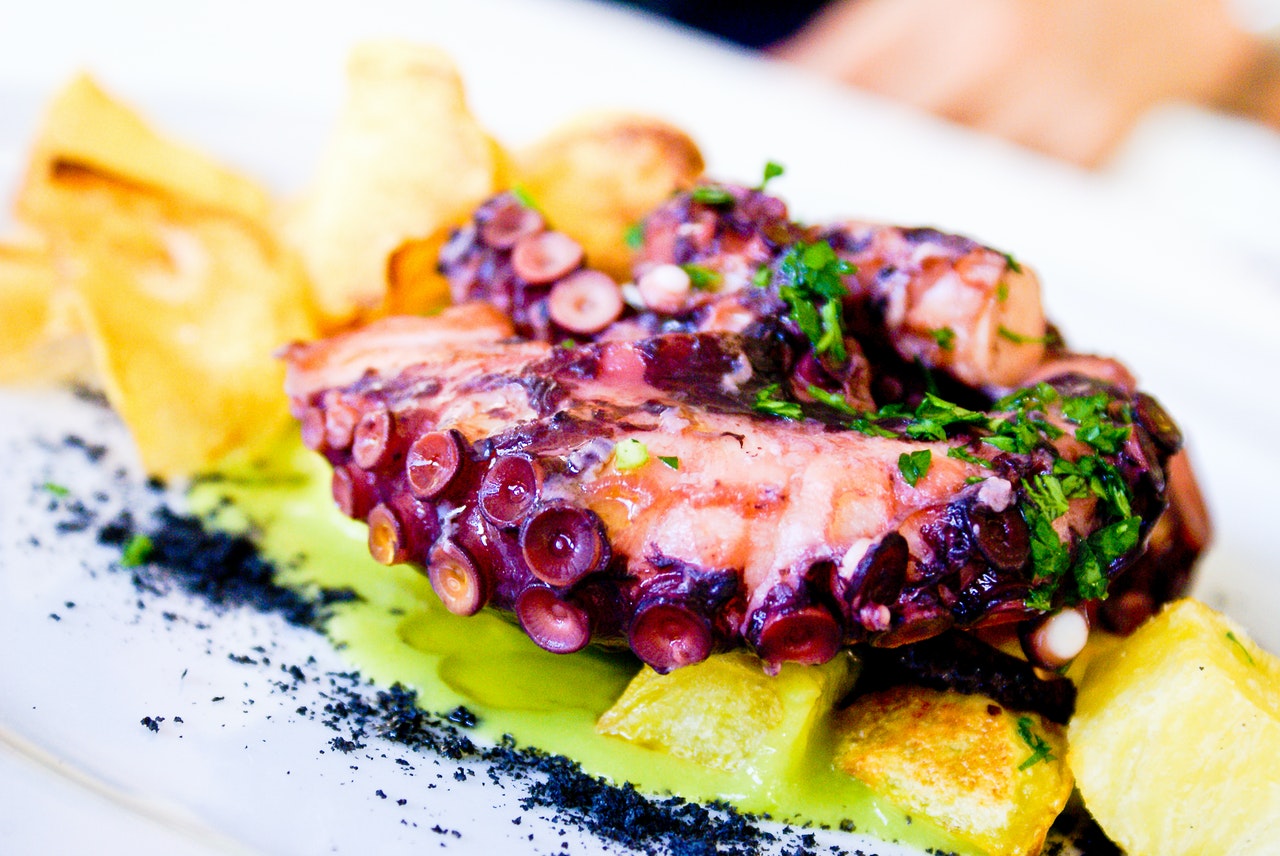 Once considered to be a meagre catch and poor man’s food, today octopus is becoming a common sight and consequently an increasingly expensive delicacy. The octopus is the Adriatic’s largest cephalopod occupying rocky shores, sandy and stony seabed. It feeds on crabs, fish and shellfish and can grow up to three metres in size weighing up to 15 kilograms. It was once a staple of Mediterranean cuisine used to prepare countless recipes which to this very day serve as fragments of gastronomic history.

Its widespread culinary use leaves room for all kinds of cooking styles. Octopus can be used in a salad, baked under peka (a bell-shaped lid), grilled, smoked, cooked in a broth or braised with different vegetables. Not all may find her appearance appealing, but still we definitely recommend you include octopus in your menu.

The smell of sea, its slimy skin and a distinct colour are signs that you have a fresh octopus at hand. When it comes to preparing octopuses, females are known for having tastier meat, whereas the quantity of suckers sets males apart from females. Males have larger suckers and some of their tentacles lack suckers. Octopus is best to be cleaned immediately after making a good purchase. Turn over the mantle and remove the guts without damaging the tentacles. Then use a small knife to remove the eyes and the acetabulum from the tentacles.

How to prepare octopus

In order to make the octopus tender before you prepare it, it would be wise to keep it submerged in sweet water for 12 hours or freeze it and prepare it the following day. Larger octopuses are used to make salads and broths, while grilling is the ideal way to prepare a smaller one. Given that octopuses release salt while being cooked, you can add just a dash of salt or no salt at all to octopus dishes.

When cooking an octopus to prepare a salad, you place the octopus in a pot and add root vegetables, laurel, garlic and lemon. When the octopus is done and chopped, you can make an octopus salad and add seafood, bean, broad beans, lentil or potatoes. The salad dressing is prepared depending on what other ingredients the salad contains. You can just use plain olive oil and lemon juice or balsamic vinegar, but you can also add some chilli peppers, parsley or kick things up a notch by using other herbs such as smoked peppers, thyme or sage.

Alongside the most commonly served potatoes, great side dishes that go well with octopus include polenta, chickpea, broad beans or navy beans.

White wine is an absolute must if you’ve opted for preparing a broth to which tomato sauce is added, to bake the octopus under peka or in an oven covered with foil.

However, the best option to get top-quality fresh octopus is to hop into your car and make your way to the Adriatic. We highly recommend you try the octopus and cuttlefish terrine prepared at the famous Bevanda Restaurant in Opatija. If you end up in Makina Tavern in Vodice, you don’t want to miss the octopus baked under peka. In case you visit Tribunj, be sure to make a stop at Bepo Tavern where, among other, you can relish octopus as part of a fascinating seafood platter containing tuna carpaccio, smoked tuna, octopus, marinated anchovies and prawns. We also suggest you try pink octopus marinated in red cabbage and red wine served as a starter at Split’s NoStress Restaurant.