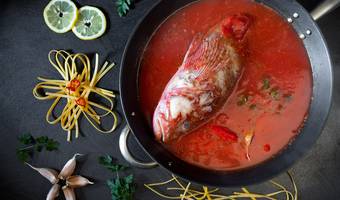 Experience culinary gifts of the underwater with scorpion fish flavours

Fragrant gradele (grill), lešada (boiled meat), broths, fish soups awaken sea flavours and inner feelings. Fish menus form an indispensible part of the Adriatic culinary tradition and scorpion fish dishes have always been a highlight. This noble fish that reigns the Adriatic sea bed has a distinct appearance and flavour. Its red-pink skin with brown spots is easily recognisable and it’s probably the easiest fish to spot if you’re not a fish expert.

The fact that it changes its colouration in order to blend in with its surroundings makes the scorpion fish so unique. When catching this fish, you’re bound to encounter all kinds of colours and diversity. Its spikes, spines and a large head in comparison to its body are the features that set it apart from other fish and they should always be removed during the cleaning process.

Its sweet meat is protected by a venom which is hidden in its dorsal fin and gills. However, there’s is no need to be concerned because the venom disintegrates during preparation and thermal processing and it only poses a threat in case of underwater encounters.

Broth it the most famous scorpion fish dish and it can be prepared with other white fish and tomato juice. According to traditional recipes, it’s most commonly served with polenta. The famous tavern Bonaca is a place where you can try a true seafood pot. Manager Ante Knežević let us in on the secret flavours.

Fishermen’s broth with scorpion fish, shells (mussels) and prawns is our house specialty. To prepare our broth first we chop some onions and fresh tomatoes, then we add some olive oil, a bit of salt and pepper and slice all the other ingredients into chunks. Given the fact that scorpion fish doesn’t take long to be ready, we add it at the very end for a quick simmering. The broth is served with polenta – Ante explained.

We continue our fish tale in tavern Sole located in Umag where scorpion fish is also served as the house specialty. Owner and manager Danijel Soša walked us through the procedure at tavern Sole.

We have two scorpion fish dishes. The first one is a very classic dish and that’s oven-baked scorpion fish with potatoes, cherry tomatoes and olives. Then we also have scorpion fish fillets in a white Vermouth white sauce with black truffles and we serve saffron risotto as a side dish – he says.

Given that fish restaurants and taverns work closely with local fishermen and fish markets, fresh fish and ideas are always aplenty. In the small town of Matalji near Opatija, Vinko Frlan, head chef at Stancija Kovačići revealed all kinds of scorpion fish specialties.

Scorpion fish dishes are extremely diverse. Considering its physical appearance, the best option is to boil it with vegetables. However, you can also cut fillets or make a carpaccio with a few drops of lemon and olive oil. You can also make a fabulous scorpion fish tartare served with capers and samphire which has been briskly boiled and you can also serve it with cow or sheep quark. In relation to its large head, there’s very little meat left once you clean the scorpion fish. For example, if you have a scorpion fish that weighs 2 kg, you’ll end up with 60 to 70 dag of meat after cleaning and filleting. But you can use the head to prepare a fantastic soup with Julienne carrots, courgettes and leek. You can also make superb scorpion fish ravioli filled with fresh basil or fresh tomatoes and, naturally, scorpion fish meat – Vinko says.